I’m convinced persons with ASD are capable of a great deal more than many of us, or even they themselves, believe.  — Whitney Ellenby 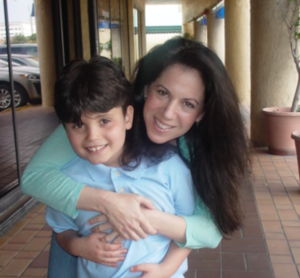 Whitney Ellenby, of Bethesda, MD, runs the organization Autism Ambassadors which organizes exclusive events for hundreds of families in the area dealing with this disability.

You may be surprised to hear how prevalent autism is in the area.  “The DC/Metro area is one of the national hotbeds of Autism, meaning that this area in particular is densely populated by families with ASD,” Ellenby shared with us.  “One reason is that services in the DC/MD area tend to be superior to those offered in other states, though the quality of schools and services is still, sadly, very zip code dependent.”

So whether you feel personally connected to autism or not — you are!  It’s all around you, and according to Ellenby, “the general public has an enormous role to play in the successful inclusion of a profoundly impacted, tantrumming child with autism – the tolerance you

provide can literally be life-changing.”

Ellenby knows, because she learned this firsthand.

“I didn’t choose Autism, it chose me,” she insists.  The Mother of an autistic son, Zack, she was “miserable… biding time waiting for Zack to recover, so I could resume what was meant to be my life.” She intended to survive the challenges, not embrace them.  “Until it began to dawn on me over years that Zack was not to recover, ever, and that life as I knew or imagined it was never going to be the same again.”

So she took matters into her own hands.

She began helping Zack to overcome his own personal fears, but after ten years or so, realized that 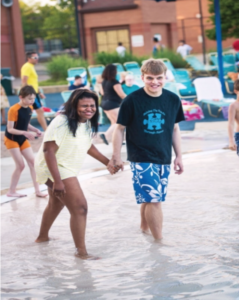 something fundamental to the greater autism community was missing – “a judgment-free ‘room of our own,’ for parents, siblings and children of all ages with ASD.  So, now she rents out entire venues — such as inflatables gyms, trampoline parks, movie theaters, indoor or outdoor pools and splashparks — exclusively for use of her Autism Ambassadors program.

“In forming the Ambassador events, which take place monthly, I wanted a place where our kids could play on their own terms – bounce, flap, yelp, strip down — it’s all good! It was crucial to me that parents and siblings be in the company of others who “get it,” where they don’t have to explain, chase, or apologize. Most people don’t realize how much energy is expended by parents of autistic children being “on,” alert to their behaviors… Most are trying desperately to control their children’s behavior in public every single minute of every single day. So the events are where they can let their shoulders down because my only rule is – no one apologizes for anything.” 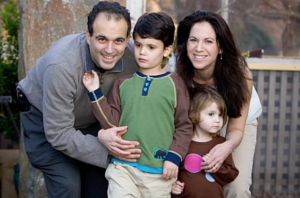 transitional bridge to inclusion.   Ellenby wants the biggest takeaway to be a shedding of the shame — “Don’t let others’ opinions keep you and your kids locked away at home. Their lives are too precious. So is yours.”

While she “never imagined this would become a passion or mission for me,” Ellenby is excited to be an advocate for her son and the a community she didn’t expect to be a part of, but which she has embraced wholeheartedly.